Bank Nifty was even stronger than Nifty today. The index went up making similar patterns to Nifty and even pushed it up. The interest on interest case in supreme Court has been moved to October 5th, and the RBI policy meet has been shifted from October 1st. Banks are still under focus for the week, as a revival of the index is expected. The index of major banks in the country closed at 21,665.5, up 683 points or 3.26% for the day.

Asian markets closed in green for the day. European markets are trading strongly in green at the time of Indian market close.

The Supreme Court postpones hearing of interest on interest case to October 5, as the Government said it needs 2 days to finalise a solution with inputs from stakeholders.

Shares of Escorts closed at ₹1,293.95, up 7.52% after the company said its joint venture with Japanese tractor manufacturer Kubota Corporation has started commercial production.

Shares of NTPC closed at ₹87.75, up 3.48% after the state-run energy company said its 660-MW thermal power plant in Bihar is ready for commercial electricity generation.

SunPharma jumped in late trade to close at ₹509.90, up 4.14% after the company said it has closed its buyback offer from March 2020. The buyback offer was to buy back 40 million shares at a price up to Rs 425 per equity share, totaling to about Rs 1,700 crore through open market route. But no shares were purchased since the VWAP (Volume Weighted Average Price) of the company during the buyback period was higher than the maximum buyback price, according to a regulatory filing. Also, the company is looking to expand its specialty business across different regions like Greater China and Japan after having established presence in the US market, as per the company’s Annual Report for 2019-20.

Shares of Rural Electrification Corporation (REC) closed the day at ₹101.85, up 2.83% after the company said its shareholders have approved a proposal to raise the overall borrowing limit to Rs 4.5 lakh crore from the existing Rs 3.5 lakh crore.

Shares of Grasim Industries, of Aditya Birla group, closed at ₹735 up 3.79% after LIC increased its stake in the company to 11.86%.

Bank stocks were on fire today after falling heavily last week. Both IndusInd Bank and Axis Bank were in the top gainers list today, after rebounding from lows. Shares of IndusInd bank closed at ₹556, up 7.99% while shares of Axis Bank closed at ₹438.05, up 5.54%.

Shares of Jubilant FoodWorks, master franchisee of Domino’s in India hit an all-time high today, after brokerage firm Jefferies started its coverage on the stock with a buy recommendation. Trading for the day closed at ₹2,422.05, up 4.66% after touching an intraday high of ₹2,457.80.

Shares of PVR Ltd closed at ₹1,223.75, up 11.15% after the West Bengal government allowed re-opening of movie halls from October 1st. This positive sentiment was also seen in the shares of Inox which closed at ₹269.50, up 5.83%, but under today’s open price. 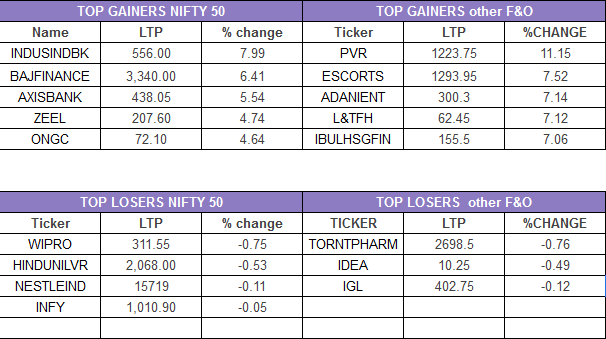 Nifty seems to have regained its confidence and is strongly moving up now. As we had talked earlier, the market has regained some bullish sentiment after closing above 11,200. Domestic Institutional investors buying up shares on Friday were also a good sign of recovery. Keep a lookout for jump in the prices of precious after RBI’s policy announcement next week. Gold stocks can be kept in your watchlist. Keep watching this space for more.

Freak Show in the Markets. Nifty Back to 15k! – Share Market Highlights Today

Today’s Market Summarised NSE systems crashed in the day with no trades being executed in the exchange after 11:40 am. With negligible volumes in BSE stocks compared to their NSE counterparts, many traders would surely have suffered. Many orders were also squared off on BSE by brokers to prevent huge losses but only ended up […]

Today’s Market Summarised Who can save Nifty now? Just the day after Republic Day celebrations, India’s financial markets have taken a huge dip and fallen below multiple supports. After opening with a gap-down at 14,201, the first candle in Nifty beautifully took resistance at yesterday’s low. It continued this fall across the whole day, making […]

Today’s Market Summarised Markets fall sharply after RBI announces hike in interest rates. NIFTY opened at 17,111 and started falling. It tried to take support at 16,920 and played around that zone. There was high volatility after the RBI announcement and market started falling. NIFTY ended the day at 16,677, down by 391 points or […]

Today’s Market Summarised Nifty sees a day of volatile consolidation on the first Thursday of October. Nifty opened the day with a big gap-up at 17,814. After moving sideways for nearly 3 hours, the index tried to give a breakout but found resistance near 17,850. With an afternoon fall, Nifty closed the day at 17,790, […]

Today’s Market Summarised One more day of volatility in the market. Nifty opened the day at 15,769 with a gap-up. There was not enough strength to move up, with the index moving sideways in a 40-point zone. Just after 1 PM, the index fell sharply in the afternoon with a 110-point fall. After all the […]

Markets stay flat as bulls and bears fight after yesterday’s fall. NIFTY opened with a slight gap-down at 15,306. The index fell to the 15,200 level but managed to bounce back up. Mostly the index moved sideways with huge volatility. NIFTY closed the day at 15,293, down by 67 points or 0.44%. BANK NIFTY started […]

What do you do when you want to purchase something outside your financial limit or face a sudden money crunch? Decades ago, people used to run to a nearby moneylender who charge high-interest rates. But things are much simpler now! Credit cards allow you to borrow money for almost a month at zero interest rates. […]
Written by Anand P M June 6, 2022June 6, 2022

Zomato Q4 Results: How Has The Food and Delivery Platform Fared?

Zomato got listed in July 2021. The food delivery platform’s share price has tanked by nearly ~42% since then. Amidst tough economic conditions, the company is trying to expand into the B2B segment with Hyperpure, growing breakneck, and keeping up with peers like Swiggy, Zepto, and Dunzo.  Zomato had recently announced its Q4 results for […]
Written by Maarg Vaidya May 31, 2022May 31, 2022

Major IT Stocks are Falling! Find Out Why!

The stock markets have not been kind to investors over the past few months. Foreign institutional investors (FIIs) have pulled out nearly Rs 1.65 lakh crore so far from the Indian equity markets this year. Major IT stocks (mostly considered defensive stocks historically) have been under heavy selling pressure. The NIFTY IT Index has fallen […]
Written by Cherian Varghese May 26, 2022May 26, 2022