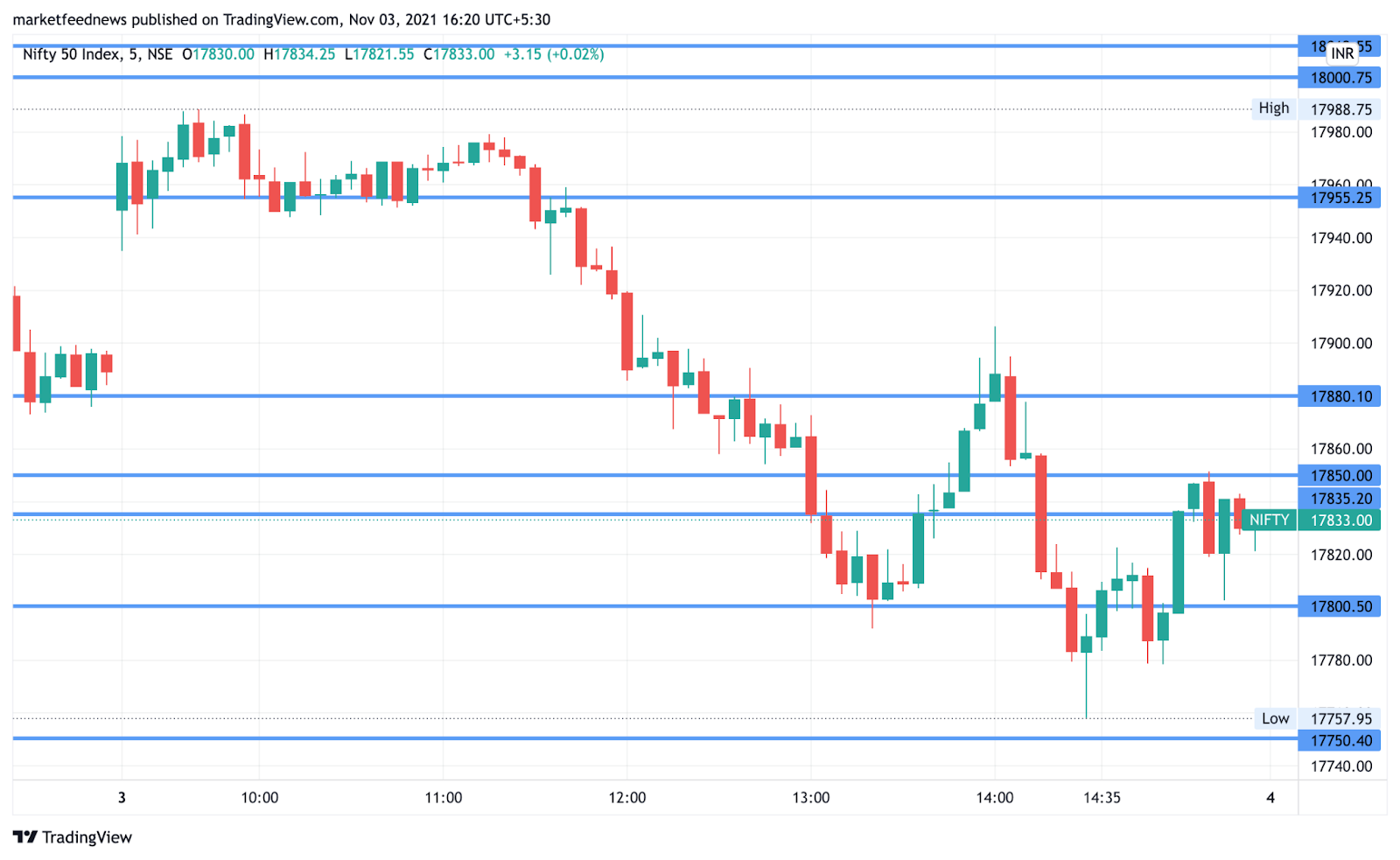 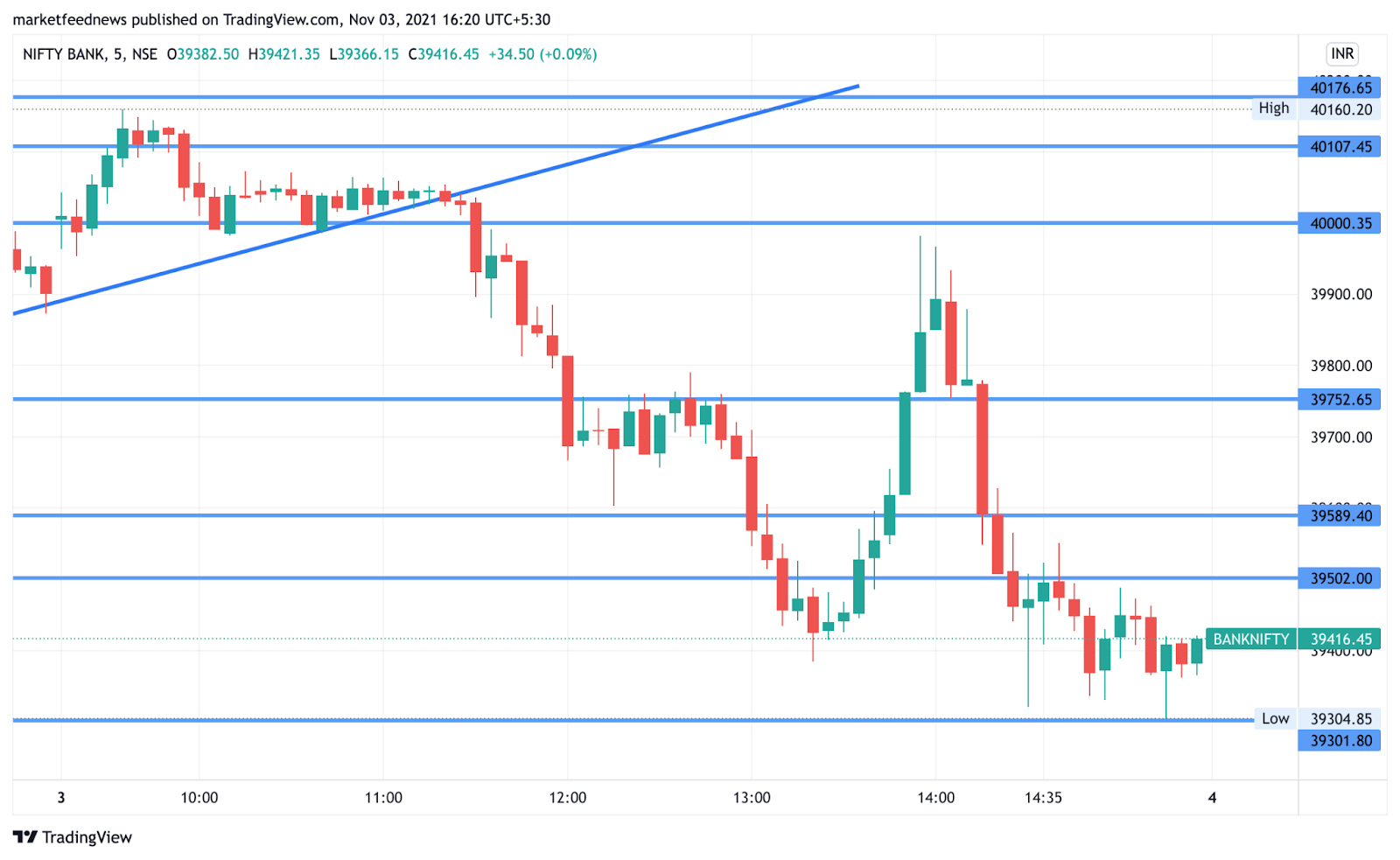 NIFTY REALTY(+1.9%) didn’t give much care to the bearishness in Nifty. NIFTY Auto and Nifty Media closed 1% down. Nifty Metal(+0.9%) closed in the green while Nifty IT closed with zero changes.

LT(+4%) moved up with expectations of higher order inflows during the October-March period (H2FY22).

IOC(+1.3%) closed in the green after announcing the plans to enter the EV sector by setting up 10,000 EV charging stations in the next three years.

Tata’s retail stock Trent(+5.2%) moved up after it reported a consolidated net profit of Rs 79.99 crore for the second quarter, yesterday.

Vodafone Idea(-1.5%) has partnered with Nokia India for 5G trials but fell along with other telecom stocks including Bharti Airtel.

Market was in a mood for heavy consolidation in the first half of the day following IT and BANK stocks.

But just around noon, selling was seen all around the market. Even Bank Nifty broke the consolidation and fell below the 40k mark.

Just after noon, SBI results almost gave a V-shaped recovery in Bank Nifty but it could not break the 40,000 mark. And just like it went up, the index feel even sharply to day-low.

There were 2 things that were certain to cause volatility today. The SBI results and the weekly expiry and both indeed causing huge moves.

There is a Muhurat Trading session tomorrow evening and we’ll be writing an in-depth article on it. But otherwise, today was the last full trading day in the week.

Hope a majority of you could turn the week net profitable. Meet you all on The Stock Market Show at 7 PM on YouTube!

Who is Keeping NIFTY Up? FII vs DII Fight Continues – Market Highlights Today

Today’s Market Summarised Nifty opened with a slight gap-down at 13,548 and made big red candles in the first many minutes. The index fell more than 100 points and took support at 13,450, then reversed to shoot back up. The opening range level was broken, and Nifty closed at 13,565, up just 9 points, or […]

Today’s Market Summarised A Real Red Day To Remember! War starts in Ukraine and markets react. Everything turns red, except VIX! NIFTY opened with a huge gap-down of 514 pts at 16,548 and it was a clear downtrend day with a lot of volatility. Multiple supports around 16,450 were tested, but it wasn’t good enough […]

Today’s Market Summarised Markets move sideways after morning volatility. NIFTY opened the day at 17,204 and fell 60 points. This fall was gained back in the first 5 minutes and the index made a quick rebound to day-high. From here, consolidation in a wide zone was seen and NIFTY ended the day at 17,203, down […]

LAST WEEK NIFTY had a beautiful rally last week though there was a down-move in the first two days. The index opened the week at 16,671, a major level and closed below it on Monday. The fall continued the next day also. There started the rally and NIFTY kept moving higher even when there were […]

News Shots  HFCL approved the allocation of 8.72 crore shares at a price of Rs 68.75 each via qualified institutional placement. Bajaj Electricals is reviewing its corporate structure to unlock growth and consider demergers, subsidiarization and strategic partnerships. Board has authorised management to consider housing power transmission and power distribution business verticals as a standalone […]

Shares of One97 Communications Ltd, the parent company of digital payments platform Paytm, have recovered ~32% from its 52-week low. Unfortunately, the stock is still down by Rs 1,280 or 65% compared to its IPO listing price of Rs 1,955! In today’s article, we analyze the recent developments surrounding Paytm and its financial performance. What […]
Written by Cherian Varghese July 6, 2022July 7, 2022