Tables turn in the market. IT and Pharma indices going to red, while financial stocks outperformed along with Autos and Metals.

Bank Nifty was more bullish in the day. After opening at 30,950, the index tried to fall in the first minute itself. But yesterday’s low was not broken and with this confidence, Banks started moving up. The index consolidated in a 350-point range for more than 4 hours before breaking out near noon. 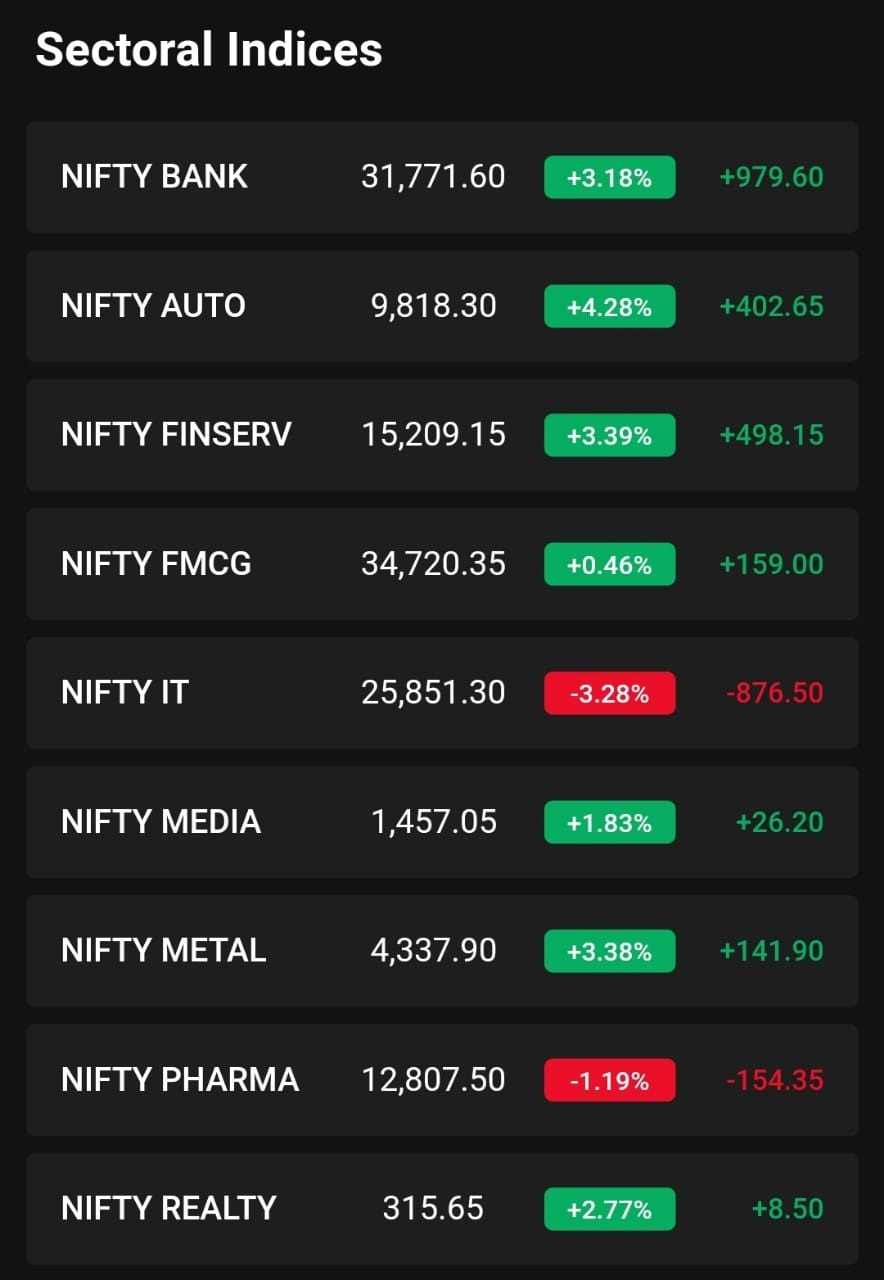 Shares of M&M closed nearly 8% higher in the day. The company has received more than 50,000 bookings for Mahindra Thar in the 6 months of launch and is ramping up production to reduce waiting time. Also planning to introduce XUV400, in competition to Hyundai’s Creta.

Shares of Bajaj Finance and Bajaj Finserv went up gradually over the day. The Bajaj Twins were top-gaining stocks of the day from the start. The NBFC stocks pushed up Nifty Finserv to go up 3.4% at close.

While it was the day of reversals of Banks and NBFCs, yesterday’s gainer Dr Reddy’s closed down 4.40% as the top-loser. The stock was bearish from the start after a gap-up opening and pushed the Pharma index down.

TCS reported their Q4 revenue numbers yesterday, with net profits going up 14% YoY and a Rs 15/share dividend. Markets being the market, TCS fell more than 4% in the day as profits were booked.

The government will soon allow all foreign-made vaccines in India. Vaccines like Pfizer, Moderna, J&J can get completely imported vials or look at manufacturing in India. Pfizer stock is up by 6%.

After the Government directed SpiceJet to gear up for more vaccine supplies. Stock is up by 2.5%.

With the cabinet soon planning to take up IDBI divestment, stock is up by more than 7.5%.

Larsen & Toubro has begun the construction of a 300MW solar plant in Saudi Arabia. The company had also won multiple thousands of crores worth of orders last day. The stock closed up by 2.3%.

Adani Ports closed 1.5% down in the day after being removed from Dow Jones Sustainability Index due to deals with Myanmar Military. The company said its investment decisions in Myanmar were under very different circumstances and all transactions & payments to Myanmar Economic Corporations have been terminated.

Ramco Systems won an order from Exsyn Aviation Solutions for aircraft data migration. Stock is up by 2% in a day where most IT stocks closed in the red.

Private weather forecasting firm Skymet Weather predicted that the 2021 monsoon will be normal. This is good for the country as a whole, since we are an agriculture-based economy. Also reassures growth for stocks linked to the agriculture sector.

Ashoka Buildcon emerged as the lowest bidder for Gauge Conversion of Bechraji–Ranuj section, a project worth Rs 334 crores. Stock is up by more than 4%.

Foreign vaccines will soon be allowed in India. With this, the vaccine shortage in the country could be solved and even vaccination for everyone above 18 could be possible.

Also, the Bombay Municipal Corporation commissioner said that the Covid test positivity rate is down from 27% to 16%. This is really good and considering that he also said that lockdown restrictions will not be as stringent as they were during the first wave, markets took this with a lot of positivity.

As vaccine concerns and lockdown concerns subsided, especially after many industry experts pushing against another lockdown, markets have calmed down.

Bank Nifty closing above yesterday’s high gives some confidence. Considering how Nifty never fails to surprise us, this might actually go either side after tomorrow’s market holiday.

AstraZeneca and Pfizer have started moving upward, and can be looked at in the coming days. Wonder where Dr Reddy will go now though!

News Shots Our favourite Tata Consumer is likely to join Nifty 50 in March. The stock may replace GAIL in the index. Bharat Forge’s German subsidiaries  reached a settlement with Germany’s national competition regulator – Bundeskartellamt. This was in connection with two separate cases. They have reached a settlement for a total amount of €32 […]

Today’s Market Summarised What an opening for Nifty in the market, with all indexes and most stocks opening with good gap-ups. Nifty opened the day at 15,075 with a 150-point gap-up. This was the highest gap-up since March 3rd. It took support at 15,050 and stayed the whole day above this level. For the most […]

Today’s Market Summarised A day of a heavy fall in the market and an almost V-shaped recovery towards the end. Nifty opened at 17,900 and was immediately bearish. Just around 11 AM, the index started testing its 17,800 support zone. Once this was broken, a free fall of nearly 230 points took Nifty to its […]

Today’s Market Summarised A red day to ned the week. Markets close in deep red with financial stocks leading the fall. After opening at 14,777 with a 120 point gap-down, Nifty tried to move up. 14,850 was taken as a good resistance and then the market did not move up further. Instead, it consolidated for […]

News Shots Tata Consumer is all set to enter Nifty 50 from March 31. It will be replacing GAIL in the index. Coal India has scheduled a meeting of the Board of Directors on March 5 to consider declaring interim dividend. The USFDA has denied SPARC’s appeal in relation to the Phase 3 trial of […]

News Shots Petrol, diesel prices on an exceptional bull run, even on the 17th consecutive day. In a historic turn of events, diesel crossed a long term resistance of Rs 80 and has become costlier than petrol in Delhi. India may impose up to 25% import tax on solar modules, solar cells. (Adani is currently […]

News Shots France, Germany to go back into new lockdowns amid COVID-19 surge. A second COVID wave and thus, lockdowns in multiple countries are happening. Global markets are responding violently to this. Dr Reddys Laboratories said the Phase 3 trials of Russia’s Sputnik V vaccine for COVID-19 in India to be conducted by it are […]

Why Was The PayTM IPO a Flop Show?

India’s largest IPO in a decade has turned a flop show! One97 Communications Ltd, the parent company of digital payments app PayTM, lost 27% of its share price on the day of its listing. Domestic retail investors had high hopes on the Rs 18,300 crore IPO. Nevertheless, investors were left surprised when the shares were […]
Written by Maarg Vaidya November 22, 2021November 22, 2021

Go Fashion (India) Ltd IPO: All You Need to Know

2021 has been a record year for companies turning public. Go Fashion (India) Ltd, a leading women’s bottom-wear brand based in Chennai, has launched its IPO today— Nov 17. The company holds a nearly 8% market share in the branded women’s bottom-wear market in India. Let us take a closer look into the company and […]
Written by Cherian Varghese November 17, 2021November 17, 2021

Tata Steel, the steel giant, saw incredible growth this quarter in terms of profits, Q2FY22. In the second quarter, the steelmaker saw its revenue grow by ~62% YoY and ~13% QoQ. The revenue growth eventually resulted in a whopping ~660% growth over a year. In the current quarter, Q2FY22, the company scored a net profit […]
Written by Maarg Vaidya November 16, 2021November 16, 2021