A day dominated by bulls in the Indian market. Banks making a comeback with Bank Nifty up more than 4% over the day.

Major Asian markets mixed, mostly in the red. All European markets are trading in the red at the time of market close.

India reported worse than expected numbers for April’s Wholesale Price Index Inflation at 10.49% against 7.39% last April. This is an 11-year high. Despite this, markets rallied with even metal stocks making a comeback.

Financial stocks led the day in the market by being 6 out of the top 10 gainers in Nifty 50. IndusInd Bank(+7.36%), SBI(up 6.3%) moved the most in the day. SBI is expected to post its results this Friday.

Dr Reddy has tied up with Shilpa MediCare for the production of the Sputnik-V vaccine for 3 years. ShilpaMed has already been in a bullish mood for the last two months and closed 11% up with the new collaboration.

Dr Reddy also announced a tie-up with Apollo Hospitals for Sputnik-V rollout and closed 1% up as other Pharma stocks moved down.

TVS Motors said during the day that TVS Ntorq 125 has crossed the 1 lakh sales milestone in international markets. The stock closed nearly 3% up.

Profit booking brought down L&T shares after the company reported their Q4 results on Friday. The stock is down 2%.

After news of Adani Green taking over SoftBank-backed SB Energy for $650 million(Rs 4,700 crores), the stock opened at the 5% Upper Circuit of Rs 1,142 and remained there.

Cipla opened the day as Nifty 50’s top loser, down by nearly 2% after reporting Q4 numbers. The stock closed down by 2.5% as Nifty’s worst-performing share.

Meanwhile, Aarti Drugs reported a lower consolidated profit at Rs 51.7 crore in Q4FY21 against Rs 58.9 crore last year. The bad results had a very huge impact and the stock fell 8%.

After good Q4 results were published by BalKrishna Industries on Saturday, the stock rallied and closed 10% up.

Federal Bank reported a 59% YoY increase in net profits to Rs 470 crores for Q4. It was higher by 18% compared to last quarter. The stock was highly volatile and closed more than 2% up.

Colgate-Palmolive (India) closed more than 2% up after reporting a 52% YoY and  27% QoQ increase in net profits to Rs 315 crores.

Bharti Airtel has reported a Q4 consolidated net profit of Rs.759 crores against a Rs 5,237 crores loss last year. But it is still down nearly 11% compared to last quarter. Revenue is up by 11% YoY to Rs 25,747  crores. The stock closed nearly 2% down.

Life Insurance companies like ICICIPRULI, HDFCLIFE and SBILIFE closed in the red, between 1.5-2% down in the day.

IT and Pharma stocks remained bearish as rupee continued to strengthen. It is now at 73.30 against the dollar. 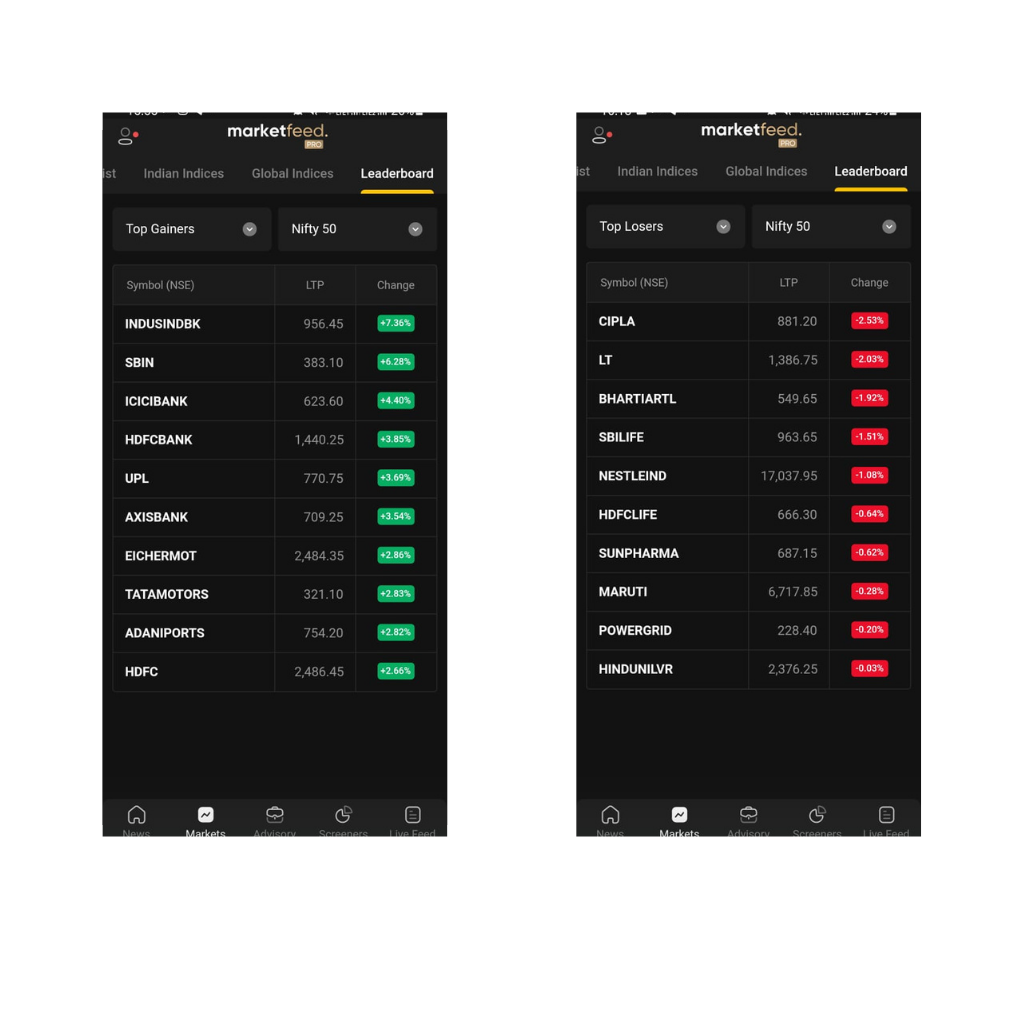 After last week’s close under 14,700, Nifty has shaken off the bears with Bank Nifty’s help. In fact, just HDFC Bank and ICICI Bank pushed Nifty up by nearly 100 points in the day,

Private Banks and PSU Banks were in a race against each other today. Even though IndusInd Bank closed as Nifty’s top gainer, SBI hit a fresh 2-month high today.

33,300 was sustained by Bank Nifty for the first time in May. This is indeed a good indication. Like we discussed on Friday, Bank Nifty was the one moving Nifty around today. Most banking stocks jumped from near their support zones.

Inflation fears will continue to cause Nifty some fear near the 15,000 ranges. But if all goes well, we might see a gap-up opening near the 15k mark tomorrow. We will have to see if profits are booked or if the bulls will continue.

SBI’s results on Friday will be the major event in the market for this week. For now, all signs indicate bullishness but with the resistance at 15,000 and 15,100 continuing for Nifty. With the strong close from HDFC, HDFC Bank and Reliance today, we might continue to see some good movement from these stocks tomorrow.

Going with the flow this week, no matter which direction markets go to. And yes, metals have started moving back up for all still bullish on the sector. This is still a good dip if you believe the sector will continue to go up. And yes, I am still interested in the sector!

Today’s Market Summarised Nifty crosses the 16,000 mark and closes at record highs on a highly bullish day. Nifty opened the day with a small gap-up at 15,950 and tried to move down. But the downside was quickly covered, and soon Nifty was testing the 16,000 mark. Once this was broken, further consolidation was seen […]

NIFTY to open with a Gap Up. Will the Fall Continue? – Share Market Today

News Shots Reliance Industries has reported a 25% rise in consolidated net profit for December quarter on a year-on-year (YoY) basis. Grasim is entering into the paints business. Board approves investment of up to Rs 5,000 crore over the next three years, primarily towards capex. Tata Motors has hiked prices of its passenger vehicle range […]

News Shots Pfizer has announced 95% efficiency and has demanded immediate emergency approval for their vaccine. TCS shareholders have approved up to Rs 16,000 crore share buyback plan. Last month, TCS’ board of directors had approved a proposal to buy back up to 5,33,33,333 equity shares of the company. Hero MotoCorp sold more than 14 […]

Today’s Market Summarised Nifty had a tough day today after opening flat at 11,942. The day’s high was at the opening level, and this was the first sign that things would not go well. Bearishness in the auto sector was another sign for Nifty’s fall today. Then, the news from Spain caused European markets to […]

Great Results from Around the Globe – Share Market Today

News Shots The American tech giants Apple, Amazon, Facebook and Alphabet reported their quarterly earnings on Thursday. All 4 tech companies managed to beat expectations in their quarterly earnings. The earnings report of the Silicon Valley giants shows that their businesses have managed to hold up amidst the coronavirus pandemic.  Reliance Industries profit jumps 31% […]

Asia Back to Green! Will BANK NIFTY Continue the Momentum? Share Market Today

News Shots  Reliance Industrial Investments and Holdings Ltd. will indirectly acquire 73.37% equity stake in New York’s Mandarin Oriental. It will acquire the remaining stake if other owners participate at the same valuations. Sobha reported Q3 sales volume of 1,322,684 square feet of super built-up area, an increase of 17% YoY. It was valued at […]

News Shots Regarding the Telecom AGR issue, the Department of Telecommunication said while telecom operators have filed affidavits, they still need time (given time till July 3rd week) to reply on the road maps and timelines for the payment of their AGR dues to the government and the security they seek to provide against it. […]

Shares of One97 Communications Ltd, the parent company of digital payments platform Paytm, have recovered ~32% from its 52-week low. Unfortunately, the stock is still down by Rs 1,280 or 65% compared to its IPO listing price of Rs 1,955! In today’s article, we analyze the recent developments surrounding Paytm and its financial performance. What […]
Written by Cherian Varghese July 6, 2022July 7, 2022